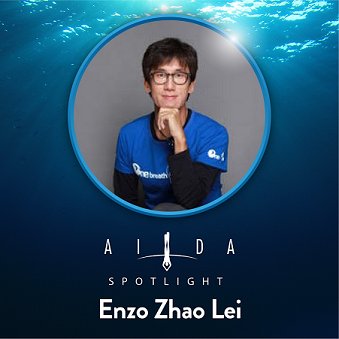 Freediving entered my world in 2012, and I was fascinated by this sport. Not long after, I quit my job at a Fortune 500 company and began my exploration and adventure of freediving in many Asian Pacific countries such as Thailand, Malaysia, Indonesia, and the Philippines. In 2013, I became the first-ever AIDA instructor in China and offered AIDA lessons in Chinese for the first time domestically. In the same year, I founded a freediving club, OneFreedive Club, which later grew to become the largest freediving education institution in China. OneFreedive Club now has over 40 active instructors and has helped over 10,000 people become freedivers.

I am the first AIDA Master level instructor and one of the first group of Instructor Trainers. I set the first national record for Static Apnea and Free Immersion in China and trained professional freedivers who successfully reached a depth of 100 meters in 2019. In 2020, I switched to focus on competitive freediving training in swimming pools and trained seven freedivers to break Asia records. From 2020 to 2021, my trainees have broken Asia records over 15 times and national records over 30 times. In June 2021, I was appointed as the main coach of China’s national freediving team, led the team to compete in World Freediving Indoor Championships in Serbia, and won the nation’s first medal with an overall ranking of 6th in the competition.

I began to dream of one day becoming a freediver as a mid-schooler when I watched the classic movie – The Big Blue. In fact, after the movie, I decided immediately to change my English name to Enzo. The film buried a seed within me and one day inspired me to pursue this passion. When I finally got the opportunity to learn about this sport in 2012, I rushed to sign up, and the rest is history.

Swimming with sea creatures is my favorite part of this sport. Encountering a whale shark in Moalboal, swimming with eagle rays and bumping into dolphins in Hawaii are among my happiest memories of freediving. Swimming silently around those amazing animals makes me feel that I am one of them, not just a visitor. When you are with them, you let go of the human consciousness and even of the desire to breathe – you feel as if you are dwelling in an alien world: the calmness and utter silence of the ocean, the creature and their unique companionship are all parts of who I am as a freediver.

I think AIDA has the standardized and conservative freediving discipline. When I first began my journey in freediving, the majority of the instructors that I got in contact with were following the AIDA system and set outstanding examples for me to follow, inspiring me to explore even further in this field. The certification standard and difficulty are consequently higher for AIDA certificates. Still, I have confidence in such standards, as AIDA stands as a training system specifically and exclusively designed for freediving. All these unique advantages enabled AIDA to become the most extensive and most professional freediving system globally.